Where the titles of famous books originated 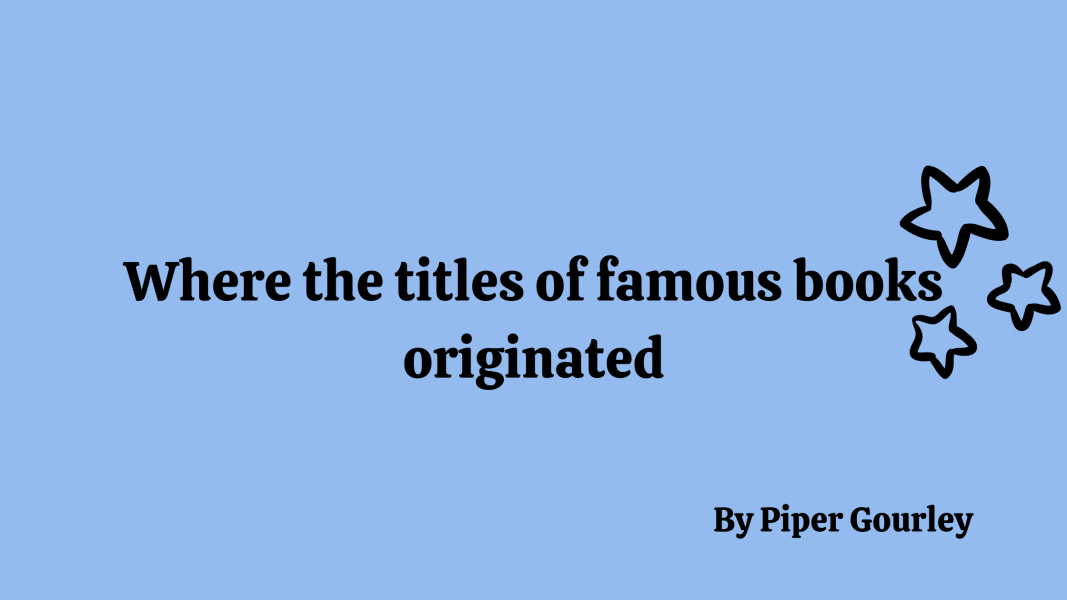 A title can play a large role in a book’s sales. How often have you stopped to read a book blurb because the title was intriguing enough to catch your eye? Some titles are pretty straightforward (such as ‘They Both Die at the End’, ‘All My Friends Are Dead’, and ‘No He's Not a Monkey, He's an Ape and He's My Son’), while others are more mysterious or flamboyant (such as ‘Hard-Boiled Wonderland and the End of the World’, ‘Extremely Loud and Incredibly Close,’ and ‘The Hitchhiker’s Guide to the Galaxy’). For decades, authors, editors, and publishers have worked in concert to ensure that each book receives a proper title for its story, as well as one that will make it popular with readers. This is how several famous book titles came to be!

Many people believe that this novel was named for the fact that the 22nd publisher was the first to not reject his novel. However, the true explanation is a little more complex. Originally, Joseph Heller planned on naming his satirical WWII masterpiece ‘Catch-18.’ Unfortunately, another novel with a similar name (‘Mila 18’ (1961) by Leon Uris) came out just a few months prior. Publishers didn’t want to release a book with a near-identical name so soon after Uris’. As a result, his editor, Robert Gottlieb, suggested they change it to ‘Catch-11’...but, of course, Ocean’s Eleven has just graced the big screen, which would create even more mix-ups between Heller and the work of other artists. Eventually, to get that nice sing-songy tone of 11, they settled on the name ‘Catch-22.’ Despite the theories, it doesn’t have any real significance as a publishing number. It just sounded pleasant when read aloud. Hey, there was a reason that they were working in publishing rather than mathematics.

Grab your copy of the wildly hilarious ‘Catch-22,’ here.

‘The Fault in Our Stars’ (2012): Lifted straight from Shakespeare

This John Green novel has all the makings of a modern-day tragedy. Did you know that another fictional tragedy inspired its title? The name ‘The Fault in Our Stars’ has Shakesperian roots. It comes from the tale of ‘Julius Caesar’ (1599), the famous real-life narrative of victory, fear, and death. Shakespeare’s stab at the dramatic story is one of his most popular plays (save ‘Hamlet’ (1603), his most bizarre and studied tragedy). In Act I, Scene 2 of J.C., Cassius says the words, “The fault, dear Brutus, is not in our stars/But in ourselves, that we are underlings.” Although he was talking about the fear he felt about Caesar becoming King, Green extracted a pleasant-sounding title for his own tale of hope and fear: ‘The Fault in Our Stars.’ His other popular novels, ‘Paper Towns’ (2008), ‘Turtles All The Way Down’ (2017), and ‘Looking for Alaska’ (2005) seem only to reference themselves and the quirks of their characters.

Ready to get emotionally wrecked? Get your copy of ‘The Fault in Our Stars’, here.

‘The Great Gatsby’ (1925): Fitzgerald’s editor vetoed everything else

Fitzgerald had a beautiful way with language, but this wasn’t an encompassing truth as far as titles went. Despite how intense and gorgeous his descriptions could be, he couldn’t settle on a title that could possibly pull together the many themes, characters, and events of the novel. He cycled through several different options, including (but not limited to): ‘Gold-Hatted Gatsby’, ‘The High-Bouncing Lover’, ‘On the Road to West Egg,’ ‘Trimalchio in West Egg’, ‘Among Ash-Heaps and Millionaires’, and ‘Under the Red, White, and Blue.’ (Yeah. That bad.)

At one point, he sent a rather feverish memo to his editor, saying, “CRAZY ABOUT TITLE UNDER THE RED WHITE AND BLUE.” His editor, on the other hand, was not crazy about it. With only a handful of days to go until its publication, Fitzgerald and his editor brainstormed until Fitzgerald reluctantly settled on the title, ‘The Great Gatsby.’ Early on, in a letter to editor Max Perkins, he said, “If the book fails commercially it will be from one of two reasons or both. First, the title is only fair, rather bad than good…” He also later wrote to Perkins: “It’s O.K. but my heart tells me I should have named it Trimalchio. However, against all the advice I suppose it would have been stupid and stubborn of me.”

Get your copy of the glitzy tale ‘The Great Gatsby,’ here.

Check out his other jazz-age novel, ‘The Beautiful and The Damned’, here.

This series (best known for the debut novel, ‘The Golden Compass’) is one of the greatest modern fantasies in the literary world. Phillip Pullman seemed to have pulled an entire world out of his imagination, and the series sold remarkably well, with an HBO show (starring names like ‘Hamilton’s Lin Manuel Miranda and ‘It’s James McAvoy) premiering out last year. However, the title of the series, ‘His Dark Materials’, had some fans scratching their heads for its meaning. Ultimately, it has a more practical root than a fantastical one: a poem. The name ‘His Dark Materials’ spawns from Book II of John Milton’s epic poem, ‘Paradise Lost’ (1667):

“Into this wilde Abyss,

The Womb of nature and perhaps her Grave,

Of neither Sea, nor Shore, nor Air, nor Fire,

But all these in their pregnant causes mixt

Confus’dly, and which thus must ever fight,

Unless th’ Almighty Maker them ordain

Into this wild Abyss the warie fiend

Stood on the brink of Hell…”

(Okay, so maybe the poem wasn’t that practical after all.)

Catch up on the incredible narrative of ‘His Dark Materials: The Golden Compass’, here. Already read book one? Be sure to grab books two and three, too.

If you boil this title down, you’ll find that its inspiration is hiding in plain sight. When Ray Bradbury first got to work on his dystopian novel, inspired by fears in the McCarthyian era that all books in the U.S. would eventually go on to be burned like in Nazi Germany, the book’s title wasn’t the first thing on his mind. The novel was adapted from another story called ‘The Fireman’ (with the protagonist hailing from a piece called ‘The Pedestrian’), and that was what he planned on calling the full-length work. However, as the book took shape, it was clear that the old title didn’t encompass the new narrative. Plus, his editors thought it was boring. Soon, the inspiration for a new title sprung up in his head: the temperature at which paper burns. Since there was no Google when Bradbury was writing the novel, he called his local fire station to consult them on the matter.

He got his answer: 451 degrees. Well, sort of. In reality, paper can actually light anywhere between 440-490, depending on the paper type. 451 is the temperature that would light a stack of papers aflame without being touched by any sort of external match or fire. Is that an analogy for how the world in Bradbury’s novel managed to (metaphorically) go up in flames all on its own? Maybe so. However, he didn’t want to leave too much room for speculative English classes to chew it to pieces. At the start of the book itself, Bradbury wrote: “FAHRENHEIT 451: The temperature at which book-paper catches fire and burns.”

For fans of insightful sci-fi, get your copy of Bradbury’s unsettling ‘Fahrenheit 451’, here.