The unique locations where famous writers wrote their best works 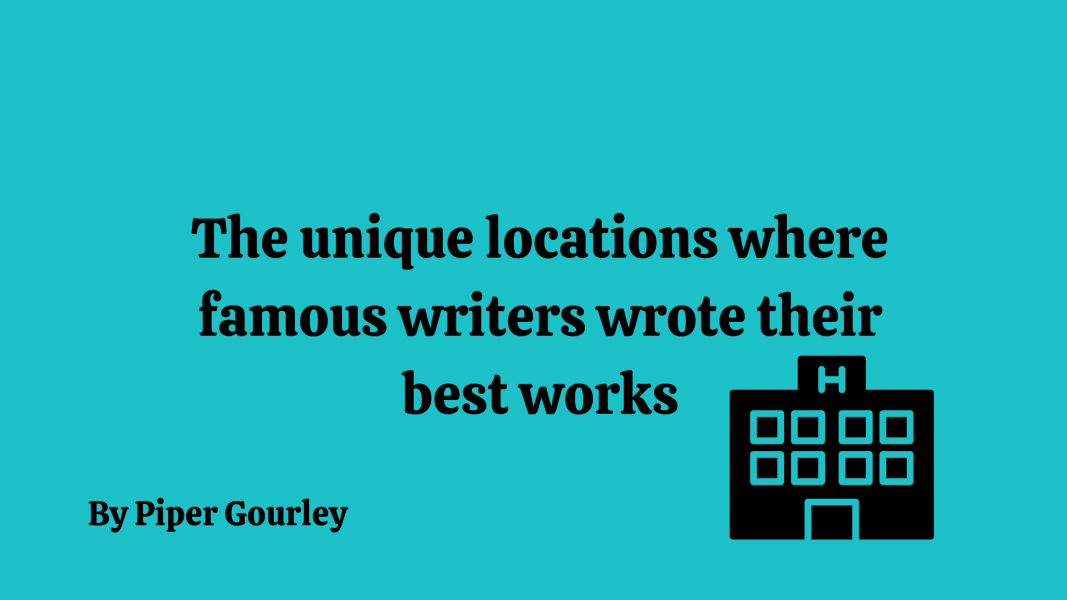 One of the perks of being a full-time novelist? You can create your own workspace. While plenty of writers opt to write in spots like a home office, a quiet spot in their apartment, or an empty table at a cafe, other creatives have found that their brains turn on in stranger locations. Many successful novels have been penned at unique literary locations. These are some of the weirder places where famed authors curled up with a pen, pencil, or typewriter and completed their greatest works.

This author and civil rights activist preferred working at a home-away-from-home. Maya Angelou found that she worked best in an environment that was devoid of the distractions of her home yet still felt comfortable to her. She settled on a perfect spot: A hotel room. Whenever Angelou was hard at work on a new novel, she would relocate to a hotel to write. Despite having a permanent residence elsewhere, Angelou would return to the hotel daily, only heading back home to sleep and relax. Essentially, the hotel rooms became office space for her. In her hometown, she paid for a room by the month so that the workspace would always be available for her.

She had specific guidelines that she enforced to ensure this space was kept creatively sacred. These included removing the artwork from the room and leaving the bedding untouched. Another stipulation? Angelou was known to favor a daily glass of sherry as she was creating. What’s better than a pleasant drink and a distraction-free hotel room? It’s every writer’s dream.

In an interview with The Paris Review, Angelou shared, “I have kept a hotel room in every town I’ve ever lived in. I rent a hotel room for a few months, leave my home at six, and try to be at work by six-thirty….I stay until twelve-thirty or one-thirty in the afternoon, and then I go home and try to breathe...I go into the room and I feel as if all my beliefs are suspended. Nothing holds me to anything. No milkmaids, no flowers, nothing. I just want to feel and then when I start to work I’ll remember. I’ll read something, maybe the Psalms, maybe, again, something from Mr. Dunbar, James Weldon Johnson. And I’ll remember how beautiful, how pliable the language is, how it will lend itself. If you pull it, it says, OK. I remember that and I start to write.”

Grab a copy of Angelou’s spectacular feat of language, ‘I Know Why the Caged Bird Sings,’ here.

If you’ve read Kay Thompson’s famous children’s series, this location should certainly ring a bell. Not only is New York City’s Plaza Hotel the spot where Thompson spent time working on her novels, but it’s also the central setting in her ‘Eloise’ series. ‘Eloise at the Plaza’ (1955) is one of the most well-known of these novels, which features the antics of young Eloise as she (and her loud personality) unsettles the Plaza’s daily routine. In Thompson’s entire series, Eloise lives in a penthouse in The Plaza. She didn’t pull the inspiration for the hotel’s glamorous environment from thin air.

Back in the 1950s, Thompson worked in a cabaret act at the Plaza Hotel. When communicating with her bandmates, she would embody the voice of Eloise, a six-year-old, to get some laughter out of them. As it turned out, Eloise was Thompson’s imaginary friend from childhood. The two had remained intertwined all throughout her upbringing, and she often spoke as Eloise as a humorous bit for her friends. The character of Eloise was the perfect story fuel, but it wasn’t until Thompson met illustrator Hilary Knight that her knack for storytelling started to take shape. Knight was so intrigued by the voice of Eloise that she decided to illustrate her for Thompson, and before long, history was made. That one drawing led to a spark of literary inspiration, and before long, Thompson began to draft Eloise’s adventures in The Plaza in between shows. To this day, Knight’s first drawing of young Eloise remains a fixture on the wall of The Plaza Hotel.

Gertrude Stein was one of the greatest (and boldest) authors of the 20th century. As a queer, Jewish woman in Europe, she outlasted two World Wars and continued to practice her craft throughout it all. The survival of herself and her art is a miracle, especially since she was frequently involved in wartime efforts. She and her husband purchased a vehicle to use as a supply-runner for French troops during WWI. Lovingly named after her “Auntie”, they imported a Model-T Ford from America to transport much-needed equipment to a nearby base. Stein was not the greatest driver. Neither she nor her husband had mastery over the vehicle. However, Stein was skilled with the car’s mechanisms. Between the two of them, they were able to successfully navigate the Ford and contribute a great deal of time and supplies to support the French soldiers.

All this said, it’s rumored that Auntie was one of Stein’s favorite spots to curl up and write. Considering how proud that Stein was of the vehicle (and how much time she spent in it during the start of her career), this isn’t fully surprising speculation.

Get a copy of Gertrude Stein’s grandiose ‘The Autobiography of Alice B. Toklas’, here.