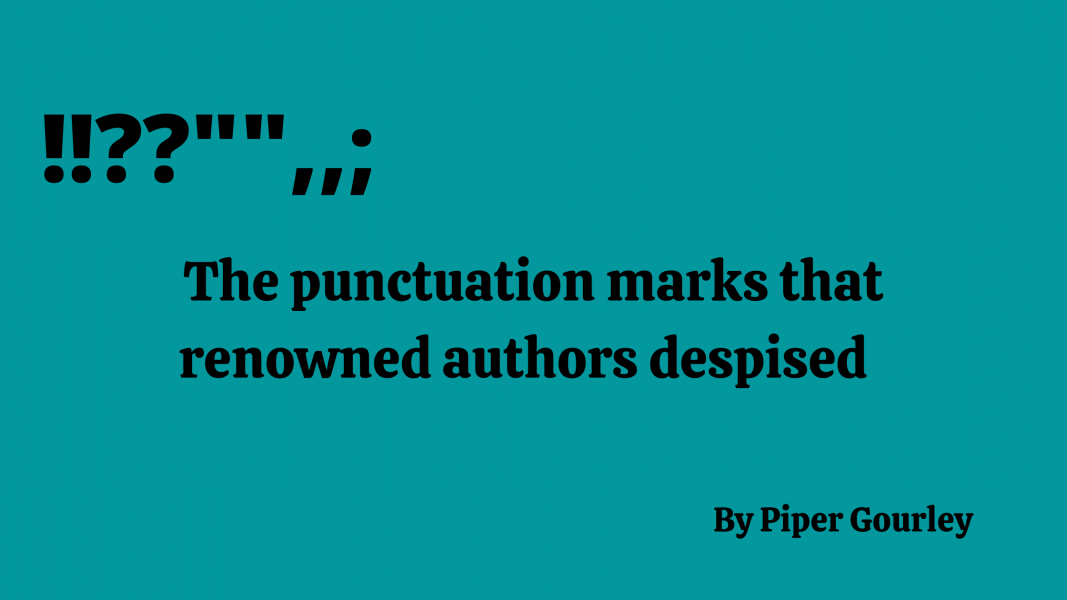 Non-writers don’t tend to give much thought to punctuation. On the other hand, those who spend their days penning novels, articles, and blog postings learn to hyper-fixate on those little markings on the page. For those who are passionate about punctuation, deciding whether to put a comma, a semicolon, or a period can make or break a sentence. Some writers even have an absurd hatred for certain punctuation marks, so much so that they publicly scorn them and refuse to use them in their work. From the semi-colon to the Oxford comma, these punctuation marks irked several famous authors to their cores—and they weren’t quiet about it.

Kurt Vonnegut: A hatred for semicolons

Some people love semicolons; some people hate them. How to properly use semicolons is the bane of the existence of many writers. Kurt Vonnegut had a particular hatred for this two-piece punctuation mark. Not only did he think that semicolons were unnecessary, but he found them to be pretentious. In his passionate novel ‘A Man Without a Country’ (2005), Vonnegut expanded on his dislike of semicolons in an essay entitled “Here is a lesson in creative writing.” His first rule in this essay? “Do not use semicolons.”

He offered a scathing review of semicolons, criticizing them for “representing absolutely nothing. All they do is show you’ve been to college.” He followed this up with, “And I realize some of you may be having trouble deciding whether I am kidding or not. So from now on, I will tell you when I’m kidding.” Is he joking about disliking semicolons? No clue. He makes no effort to clear up his opinion before moving on to his next critical writing opinion. However, Vonnegut did use a semicolon in one of his later works, seemingly contradicting his previous write-off of the unique punctuation mark.

Get one of Kurt Vonnegut’s fascinating novels, such as ‘Slaughterhouse-Five’ or ‘Cat’s Cradle’, here.

Stein was known for her quirky personality and charismatic writing, yet she took a particular conflict with multiple of the writing mechanics of her time, including specific punctuation marks. In fact, she wrote a lengthy essay on her opinions of punctuation marks in ‘Lectures in America’, praising some and scolding others. One of the markings she hated the most was the comma. “I say commas are servile and they have no life of their own, and their use...is a way of replacing one’s own interest,” she said. “A comma by helping you along holding your coat for you and putting on your shoes keeps you from living your life as actively as you should lead it and to me for many years...the use of them was positively degrading.” Ouch. Although commas appear in most of her work (including her essay about how much she hates them), it was probably more of the editors’ choice than her own.

The other punctuation mark that Stein disliked? Question marks. Why did she resent them? She found them to be unnecessary. Stein remarked, “The question mark is alright when it is all alone when it is used as a brand on cattle...but connected with writing it is completely entirely completely uninteresting...anybody who can read at all knows when a question is a question as it is written in writing. Therefore I ask you therefore wherefore should one use the question mark.”

In her essay, she also remarked that, although she has never used colons and semicolons, she sees their appeal as marks of “adventure,” having a certain character and substance that commas seemed to lack. If Stein and Vonnegut ever ran across one another, they most certainly had a tiff about this subject.

Pick up a copy of Gertrude Stein’s punctuation-defying poem ‘Lifting Belly’ here, or her witty ‘The Autobiography of Alice B. Toklas’, here.

Avid readers of James Joyce, one of the most renowned novelists of the 20th century, will note that he never uses quotation marks in any of his books. Ever. Instead of quotation marks, Joyce uses em-dashes to distinguish when someone is speaking. Although this choice is not uncommon in literature, especially in continental Europe, Joyce didn’t do it simply because he was fond of the dashes. He had an absurd dislike for quotation marks.

In ‘Letters of James Joyce’, he called quotation marks “perverted commas,” stating, “I think the fewer the quotation marks the better...The ‘ ’ are to be used only in the case of a quotation in full dress, I think, i.e., when it is used to prove or to contradict or to show.” Overall, Joyce boils down his punctuation in plenty of his work, using only the bare minimum of commas, periods, and other markings to get his point across. He even goes the entire final soliloquy of Ulysses (24,048 words) only using two periods and one comma. Maybe he just hates all punctuation?

To experience that 20,000-word sentence for yourself, get ahold of James Joyce’s ‘Ulysses’ here.

This bestselling novelist and screenwriter of ‘No Country for Old Men’ and ‘The Road’ doesn’t dislike just one punctuation mark; he despises them all. Although he is forced to use basic punctuation in his award-winning writings, he never goes out of his way to adventure with semicolons, colons, or any other markings that don’t serve to make a sentence grammatically correct. He also never uses quotation marks in his work, telling Oprah, “There’s no need to blot the page up with weird little marks. If you write properly you shouldn’t have to punctuate.”

Unsurprisingly, he got plenty of his punctuation tips from James Joyce. “James Joyce is a good model for punctuation. He keeps it to an absolute minimum.” He also credits his opinion on punctuation to one of his jobs in college, in which he was tasked with editing essays in a textbook. He found that good writing was often overshadowed by poor punctuation. He ended up having to write out the semicolons and misplaced markings over and over again. This would certainly be enough to turn anyone against unnecessary punctuation. Fortunately, he has become famous enough to only write and edit his own work, so he can play with punctuation however he would like.

Check out McCarthy’s many fascinating and vibrant novels here.