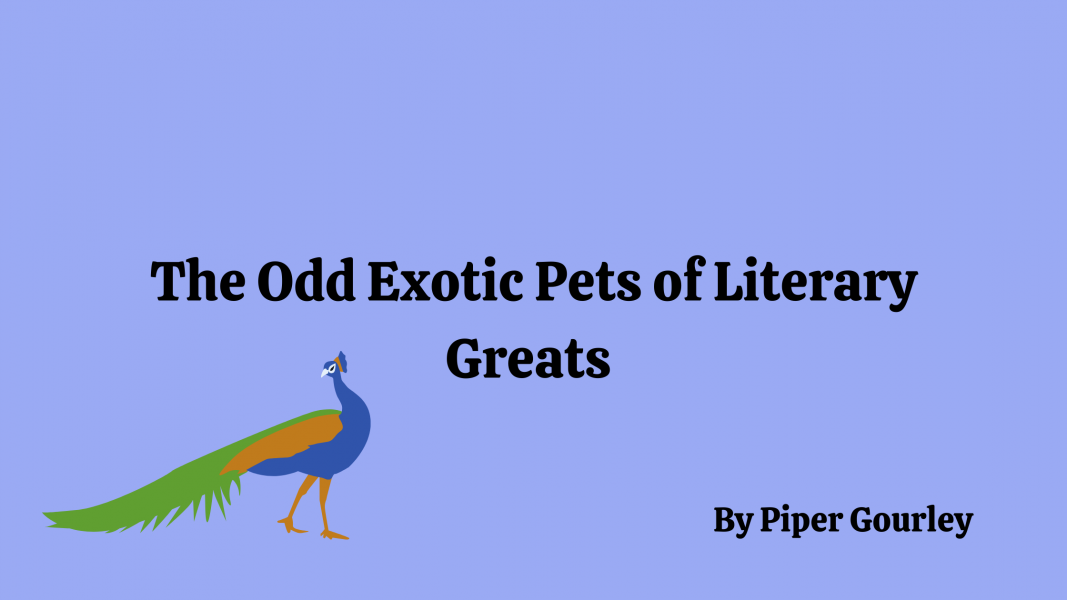 Who better to keep a focused writer company than a pet? Many renowned writers have opted for quiet cats or cuddly canines when choosing critters to bring home. However, other bright authors have invited much odder animals into their lives. These creatures may not be as friendly, practical, or noiseless as domestic animals, but a handful of hearty writers were up for the challenge of raising these lively pets. These are a few of the strange creatures that the literary greats cared for throughout their fruitful careers.

In addition to being the godfather of gonzo journalism, Hunter S. Thompson (author of Fear and Loathing, Hell’s Angels, and similar works) was also the proud owner of a menagerie of bizarre pets. He owned everything from exotic birds to treasure-protecting Dobermans, and his collection only grew with his wealth. One of Thompson’s most beloved finds was a monkey that he adopted while working in Brazil in the 1960s. In addition to smuggling a coatimundi into his hotel (an unusual, raccoon-looking creature that Thompson trained to use the bathroom), Thompson took a liking to a monkey that he met at a bar. After a few, shared drinks, the spirited monkey headed back to Thompson’s hotel in the journalist’s pocket.

Unfortunately, in Thompson’s live-fast, die-young world, the monkey quickly became addicted to alcohol. There was a chance that the monkey was already an alcoholic before entering Thompson’s life, but Thompson enabled him to continue to binge drink. Eventually, the monkey pitched himself from the balcony of Thompson’s hotel room.

One of Thompson’s dear friends, Bob Bone, recalled: “In 1962, I left my job at Popular Photography to edit a small business magazine in Brazil. A few months later, Hunter showed up on Copacabana Beach...He had a drunk monkey in his jacket pocket. His explanation was that he met someone in a bar who would buy him a drink only if he could buy the monkey a drink at the same time. The monkey eventually committed suicide, leaping into the air from the balcony of my tenth-floor apartment—we presumed a victim of the DTs.”

Fans of Thompson know that his fiction is just as bizarre as his reality. Check out the plethora of strange Thompson books we have on our shelves here.

In life, Flannery O’ Connor was many things, including a short story writer, an educator, and a bird enthusiast. O’ Connor owned a variety of avian creatures, from barnyard chickens to Japanese silky bantams. However, she felt that something was missing from her collection: peacocks. For many years, she admired these beautiful birds from afar. When she decided she could no longer do without them, she ordered a batch of them from Florida. Although she was immediately taken with their colorful feathers, the peacocks were not happy with their relocation. O’ Connor found that her “peafowl” were noisy, distrustful, and took over her yard with an aggressive unity. Still, she grew more smitten with them by the day, admiring their independence, their spirit, and, of course, their gorgeous appearance.

Across the course of a decade, O’ Connor ended up owning well over 40 peacocks. She wrote about their behavior in great detail in personal essays, including an in-depth analysis of raising the creatures entitled “King of the Birds.” She slipped the mention of peacocks into some of her other fiction writings (a fun Easter egg for fans who knew about her feathered friends). Her fixation bled into most areas of her life, and for many years, O’ Connor sent all of her letters off with a peacock feather enclosed. O’ Connor was, above all else, a phenomenal wordsmith, and her descriptions of her peacocks were rich with enthusiasm and admiration.

In her 1961 publication “King of the Birds,” O’ Connor wrote: “If I re­fer to them as ‘my’ peafowl, the pro­noun is legal, nothing more. I am the menial, at the beck and squawk of any feathered worthy who wants service...Nine years have passed since my first peafowl arrived. I have forty beaks to feed. Necessity is the mother of sev­eral other things besides invention...Many people, I have found, are con­genitally unable to appreciate the sight of a peacock. Once or twice I have been asked what the peacock is ‘good for’—a question which gets no answer from me because it deserves none.”

Can you appreciate a great story as much as Flannery O’ Connor appreciated her peacocks? Get your copy of ‘The Complete Stories’ here, and check out her haunting novel ‘Wise Blood’ here.

Have you ever wondered what inspired Edgar Allan Poe to write about a raven in his most famous piece? Look no further than Charles Dickens’ pet raven, Grip the Knowing. Grip was Dickens’ dearest companion apart from his wife and kids. The bird would often trail Dickens around, chatter at him, and play with (read: bite) Dickens’ children. The amusing creature even had a favorite expression to squawk: “Halloa old girl!” It’s no wonder that the lively Grip earned a spot in the pages of Dickens’ Barnaby Rudge (1841), the author’s fifth novel.

Sadly, Grip the Knowing became obsessed with consuming paint. He ate paint chips off the sides of Dickens’ house and began to drink liquid paint from nearby tins. This likely resulted in the health complications that led Grip to become gravely ill in mid-1841. Although a vet treated Grip with castor oil (the cure-all of the 1840s), he experienced only brief relief from his symptoms before passing away.

Dickens’ was heartbroken, yet he was not ready to give up on bird ownership. Rather than wallowing in sorrow, Dickens’ acquired another raven, naming him after his predecessor. Grip II (later replaced by Grip III) became Dickens’ newest mate, with a personality equally as hilarious and amusing as the previous Grip’s.

In 1842, the new Grip was introduced to Poe (who had read and loved Barnaby Rudge) during a friendly meeting with Dickens. Poe was just as intrigued by the raven as he had been when he read about Grip in Dickens’ novel. Historians believe that Poe’s interest in Dickens’ strange bird was what ultimately led him to choose a raven over other verbose fowls in his famous 1845 piece, The Raven. Although Dickens and Poe are both gone and buried, the original Grip was stuffed by the mourning author, and his tiny, taxidermied body can be visited in the Free Library of Philadelphia.

If you want to experience Dickens’ dramatic leanings for yourself, grab a copy of ‘Tale of Two Cities’ here.

If you’re looking for more Grip-inspired content (and other odd and haunting subjects), get your copy of Poe’s ‘Complete Tales & Poems’ here.