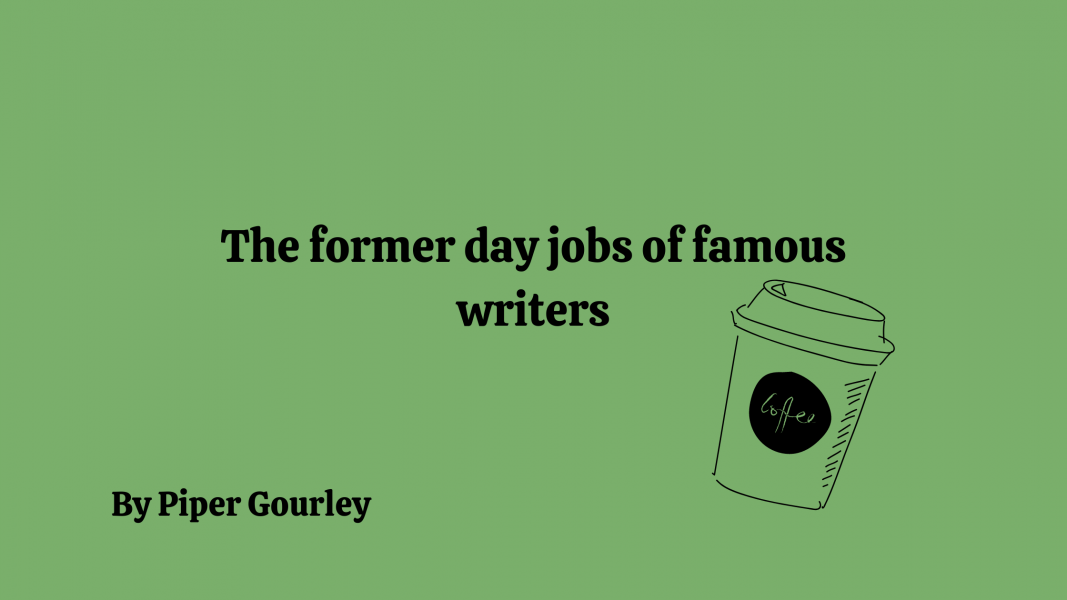 No author starts off their first job with a big break (at least, none I’ve heard of). Before these authors made it big, they had to pay their bills like everyone else. While it’s tough to imagine them not behind a pen or typewriter, these writers were once on different paths, waiting for their chance to go fully literary. Fortunately, they all found their way to the field of writing. Many of them drew on their experiences in their prior jobs to craft their future stories. These are a handful of authors who worked an eclectic collection of jobs before their writing blew up!

Back before her novels (particularly her ‘Handmaid’s Tale’ series) put her on the charts, Atwood worked at a coffee shop as a counter girl and cashier. She was forced to learn how to operate a cash register and to serve coffee to customers all day long. While she didn’t find serving drinks to be all that unpleasant, Atwood had a specific disdain for this particular occupation. She went as far as to write an entire essay about how much she despised her first “real job,” due largely in part to the stubborn cash register, calling the article “Ka-Ching!”

In the essay, she detailed her struggles learning to operate the cash register. Her boss later admitted that her lack of experience with a register was what compelled him to hire her, as he felt assured that she wouldn’t steal any of the shop’s money. Atwood wrote: “I said I had never worked a cash register before. This delighted the manager, a plump, unctuous character out of some novel I hadn't yet read. He said the cash register, too, was easy as pie, and I would catch on to it in no time...But the cash register was perverse. Its drawers would pop open for no reason, or it would ring eerily when I swore I was nowhere near it; 0r it would lock itself shut, and the queue of customers waiting to pay would lengthen and scowl as I wrestled and sweated. I kept expecting to be fired for incompetence, but the manager chortled more than ever.”

Grab your own copies of Atwood’s poignant and disturbing novels, here.

Vladimir Nabovok is a household name for his novel ‘Lolita’ (1955), yet, before he was a bestselling fiction writer, he was cemented in a different profession. Fortunately, it was just as whimsical as novel writing. In his prior occupation, rather than writing fiction, he wrote about butterflies. An avid entomologist committed to hunting, collecting, and cataloging butterflies, the finer details of the nature of everyday life were not lost on Nabovok. Every year, the Russian-born novelist would take a trip through the U.S. to try to capture butterflies of interest. During the downtime of one of these trips, he began to write ‘Lolita’. Even after he sold his book, he never lost his love for butterflies, nor did he ever really stop hunting them. He even had a butterfly species named after him (Nabokovia) and several more were named for characters from his successful novels.

Grab a copy of ‘Think, Write, and Speak’ (2020) to get Nabovok’s expert thoughts on writing, here.

Believe it or not, Hughes got his big break while working as a busboy at a hotel restaurant. He was living in Washington D.C. and working at the Wardman Park Hotel when the famed literary critic Vachel Lindsay walked through the front doors of the hotel restaurant. As someone who wrote poetry in his personal time, Hughes jumped on the chance to be able to share his work with someone who might be able to give him a leg-up in the literary industry. While bussing the tables, he presented several sheets of poetry to Lindsay. At first, she didn’t quite understand what had been placed in front of her. As she gave the poetry a read-over, she found herself deeply impressed with the work. When she asked Hughes who had written the poems, he admitted that he was the man behind the pen. With her praises, Hughes’ gained the confidence and audience to begin fostering his career as one of the greatest poets in history.

Experience Hughes’ penmanship magic with your own copy of ‘The Collected Poems of Langston Hughes’ (1994), here.

Joyce’s vibrant work certainly is cinematic in many ways, yet many people don’t know that the author owned his very own cinema in Dublin. Early in life, Joyce didn’t seem to have a clear trajectory for his future. He pursued medicine in university, then he quit that degree, later becoming a piano man, a singer, and a teacher. Eventually, he returned to Ireland, the site of many of his most successful novels and short stories. He didn’t dive straight into a writing career, though. Rather, he and his partner, Nora Barnacle, decided to open up the first theater in Dublin, called The Volta. Although it shut down after a short year, Joyce never lost his passion for the narrative structure of movies, and this became apparent in his short stories and books.

His novel ‘Ulysses’ (1922) was remarked to be like “an unreeling film” by critic Harry Levin. The concrete detailing in work like ‘Dubliners’ (1914) makes each written segment come to life on the page like a film scene. After grueling eye surgery, Joyce was quoted saying, “whenever I am obliged to lie with my eyes closed I see a cinematograph going on and on and it brings back to my memory things I had almost forgotten.”

Check out some of Joyce’s available work and experience his movie-like writing for yourself, here.

This author is one of the most renowned short story writers of the last century, but he didn’t always expect to go into literature. As the son of a sawmill worker, Raymond Carver initially imagined himself following in his father’s footsteps. He worked in the sawmill in his early adulthood, later supporting his wife and kids by bouncing between professions. At different points, he worked as a gas-station attendant, a delivery person, and a textbook editor. As he became more serious about pursuing writing, his experiences living on the poverty line and within the working class informed his stories. His first collection, ‘Will You Please Be Quiet, Please?’ (1976), is what put him on the map and allowed him to pursue writing full-time.

In an interview with The Paris Review, Carver shared,“For a long time I wanted to do the kind of work my dad did. He was going to ask his foreman at the mill to put me on after I graduated. So I worked at the mill for about six months. But I hated the work and knew from the first day I didn't want to do that for the rest of my life.”

Grab your own copy of one of Carver’s amazing short story collections ‘Where I’m Calling From’ (1988), here, or ‘What We Talk About When We Talk About Love’ (1981), here.