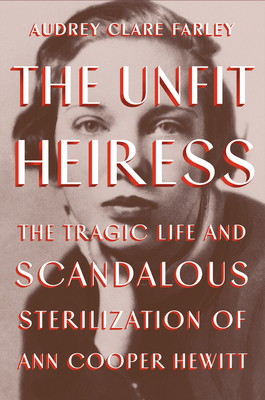 For readers of The Immortal Life of Henrietta Lacks and The Phantom of Fifth Avenue, a page-turning drama of fortunes, eugenics and women's reproductive rights framed by the sordid court battle between Ann Cooper Hewitt and her socialite mother.

At the turn of the twentieth century, American women began to reject Victorian propriety in favor of passion and livelihood outside the home. This alarmed authorities, who feared certain "over-sexed" women could destroy civilization if allowed to reproduce and pass on their defects. Set against this backdrop, The Unfit Heiress chronicles the fight for inheritance, both genetic and monetary, between Ann Cooper Hewitt and her mother Maryon.

In 1934, aided by a California eugenics law, the socialite Maryon Cooper Hewitt had her "promiscuous" daughter declared feebleminded and sterilized without her knowledge. She did this to deprive Ann of millions of dollars from her father's estate, which contained a child-bearing stipulation. When a sensational court case ensued, the American public was captivated. So were eugenicists, who saw an opportunity to restrict reproductive rights in America for decades to come.

This riveting story unfolds through the brilliant research of Audrey Clare Farley, who captures the interior lives of these women on the pages and poses questions that remain relevant today: What does it mean to be "unfit" for motherhood? In the battle for reproductive rights, can we forgive the women who side against us? And can we forgive our mothers if they are the ones who inflict the deepest wounds?

Audrey Clare Farley is a writer, book reviewer, and historian of twentieth-century American fiction and culture. Having earned a PhD in English from University of Maryland, College Park in 2017, she occasionally lectures in history and literature at local universities. Her essay on Ann Cooper Hewitt, published in July 2019 in Narratively, was the publication's second most-read story of the year. Her writing on the eugenics movement and other topics has appeared in The Atlantic, The Washington Post, The New Republic, Public Books, Lady Science, Longreads, and Marginalia Review of Books, where she is a contributing editor. She lives in Hanover, Pennsylvania.

“THE UNFIT HEIRESS is a sensational story told with nuance and humanity with clear reverberations to the present. Historian Audrey Clare Farley's writing jumps off the page, as Ann Cooper Hewitt, once a one-dimensional tabloid fixation, is brought into full relief as a complicated victim of her time, standing in the crosshairs of the growing eugenics movement and the emergence of a "over-sexed" and "dangerous" New Woman. But most importantly, this book is a necessary call to remember the high stakes and terrible history of the longstanding fight for control over women's bodies.”—Susannah Cahalan, #1 New York Times bestselling author of Brain on Fire

“THE UNFIT HEIRESS is the propulsive tale of a high-society scandal that triggered a high-stakes courtroom battle. It is also an illuminating exploration of America’s long, dark history of eugenics and forced sterilization. By braiding together these narrative threads, Audrey Clare Farley has accomplished the rare feat of writing a book that is as thought-provoking as it is page-turning.”—Luke Dittrich, New York Times bestselling author Patient H.M.

“This book is as timely as ever. A gripping tale about the atrocity of systematic reproductive control.”—Booklist, starred review

“Farley sets a brisk pace and persuasively reimagines the dynamic between Ann and Maryon. This is an eye-opening portrait of an obscure yet fascinating case.”—Publishers Weekly

“Expertly blending biography and history, and using the life of Ann Cooper Hewitt as a backdrop, Farley has created an absorbing biography effectively explaining how the legacy of eugenics still persists today. Hewitt’s story will engage anyone interested in women’s history.”—Library Journal

“THE UNFIT HEIRESS is not only a fascinating look at a wildly dysfunctional high society family, it’s also a compulsively readable account of the reproductive myths and bigotry-driven pseudoscience that still shape our world today.” —Rachel Monroe, author of Savage Appetites

"THE UNFIT HEIRESS is a triumph of compassion, historical inquiry, and intellectual rigor. In her elegant telling of Ann Cooper Hewitt's story, Farley shines her bright, empathetic light on profoundly imperfect humans and the myriad, often tragic ways we grapple for fulfillment. At the same time, she renders with crystalline precision the history of American eugenics, insisting—gently, yet steadfastly—that we look where we'd rather avert our gaze. This book startled me, seized my attention, and summoned my empathy when I least expected it."—Rachel Vorona Cote, author of Too Much

"In Audrey Clare Farley's book, the fascinating and unsettling case—and the worldwide media sensation it caused—is carefully revisited to expose what it meant to be considered an unfit parent and how easily family can become foes."—Town and Country

“This well-researched and endlessly readable book is centered on the sterilization of Ann Cooper Hewitt, deemed too promiscuous by her mother to receive her father’s inheritance. Part biography and part history of eugenics, this one is intriguing and terrifying.”—Ms. Magazine

“In her new book, The Unfit Heiress, Audrey Clare Farley untangles this dark and complex chapter of American history and shines a light on official and medical complicity in a horrifying system. Her book is exceedingly well-researched yet reads with the momentum of a thriller.”—Crimereads

“The Unfit Heiress: The Tragic Life and Scandalous Sterilization of Ann Cooper Hewitt by Audrey Clare Farley, tells the sad and shocking tale of Cooper Hewitt, the daughter of famed engineer and inventor Peter Cooper Hewitt, and how her case reflected a time when eugenics was not only frighteningly common, but widely accepted in the US.”—The New York Post