Girl in the Walls: A Novel (Hardcover) 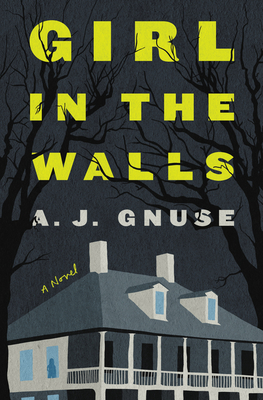 Eventually, every hidden thing is found.

Elise knows every inch of the house. She knows which boards will creak. She knows where the gaps are in the walls. She knows which parts can take her in, hide her away. It’s home, after all. The home her parents made for her, before they were taken from her in a car crash. And home is where you stay, no matter what.

Eddie is a teenager trying to forget about the girl he sometimes sees out of the corner of his eye. But when his hotheaded older brother senses her, too, they are faced with the question of how to get rid of someone they aren’t sure even exists. And as they try to cast her out, they unwittingly bring an unexpected and far more real threat to their doorstep.

Written with grace and enormous heart, Girl in the Walls is a novel about carrying on through grief, forging unconventional friendships, and realizing, little by little, that we don’t need to fear what we do not understand.

A native of New Orleans, A. J. Gnuse received an MFA in fiction from UNC Wilmington and was a Kenyon Review Peter Taylor Fellow. His short stories have been published in Gulf Coast, Guernica, the Los Angeles Review, Passages North, Potomac Review, and other magazines. Girl in the Walls is his first novel. He lives in Texas.

“The novel begins as an eerie meditation on grief, family dysfunction and things that go bump in the night. But about halfway through, Gnuse’s masterfully crafted slow burn ignites into a hair-raising thriller that is as unnerving as it is unexpected.”
— Atlanta Journal-Constitution

“Girl in the Walls poses the question — how well do we really know where we live? . . . Gnuse tugs the seemingly insignificant into the spotlight and holds it there. He makes the forgotten and easily brushed away threads of the story crystal clear, while entwining a narrative of growing up and learning to live with, while not clinging to, trauma. It is a story focused on the psychological without prescribing itself as such; it entertains while providing a mirror to analyze the fears that make us leave our lights on just a little bit longer each night.”

“A young girl hides in her childhood home in Gnuse’s disquieting debut. . . . Gnuse builds a good deal of tension as the story reaches its climax, involving a dangerous Jonah and even more dangerous hurricane. . . . Vivid.”
— Publishers Weekly

“After a tragedy, a young Louisiana girl returns to her former home, though there's another family already living in it. . . . a coming-of-age tale with a twist.”
— Kirkus Reviews

“A grieving, orphaned girl lives inside the walls of the last place where she felt love in this disquieting coming-of-age story. . . A.J. Gnuse's first novel, Girl in the Walls, gathers a damaged, plucky tween and an angst-ridden family and throws a hellacious storm at them, but still lets a little hope peek from behind the darkest clouds.”
— Shelf Awareness


"Strange, outré—this remarkable debut novel is both of these and more... Gnuse has done a brilliant job of making the implausible plausible and of creating characters, especially Eddie, who are simply unforgettable. The Louisiana setting is evocative and a marvel of verisimilitude. The sui-generis result is haunting and, like the characters, unforgettable."
— Booklist (Starred Review)

"Girl in the Walls meets the test as literary fiction. (Some people might be reminded of Donna Tartt's The Little Friend.) Yet it also works as a solid commercial thriller."
— Starnews

"Girl in the Walls is A.J. Gnuse’s debut novel and an astounding one at that."
— Girly Book Club

“Tense and terrifying, with echoes of Shirley Jackson, Girl in the Walls is a spectacular debut. An elegant meditation on grief, love, and family, this truly extraordinary novel is a page-turner with deeply imagined characters, and A. J. Gnuse’s prose is as sharp and precise and muscular as any I’ve seen."
— Elizabeth Wetmore, author of Valentine

“Ever been deep underwater, holding your breath, wondering if you will make it to the surface? OK. Remember that famous scene in the movie, 'Wait Until Dark?' Remember that feeling while reading 'The Tell-Tale Heart?' Remember the evil character in the movie, 'No Country For Old Men?' Remember the most terrifying nightmare you’ve ever had? OK, so now: Here’s your book, Girl in the Walls, by Adam Gnuse. It’s really scary, and literary to boot, going way down deep, and way up high. Gnuse’s first novel says that he is the real thing, out of the gate.”
— Clyde Edgerton, author of The Night Train and Killer Diller

“Clear your calendar. Once you start reading Girl in the Walls, you won’t want to do anything else. Read it first for the thrill ride. Then read it a second time, slowly, to savor language that drips and swells with the terrifying beauty of a Gulf Coast hurricane. A riveting, astonishing, and flat-out gorgeous debut.”
— Nina de Gramont, author of The Christie Affair

"Gnuse's debut is bold and compelling, subtle and sublime, with writing so good that you're torn between racing ahead and lingering. I found myself holding my breath and never wanting to leave, despite the darkness. A uniquely gothic tale about grief, belonging and hiding in plain sight."
— Jess Kidd, author of Mr. Flood's Last Resort

“Gnuse is a writer of vision, who builds up his novel like the most exquisite music box.  It plays out perfectly, and will leave you entranced long after its covers are closed.”
— Ali Shaw, author of The Trees

"Girl in the Walls is as much about willful Elise, who haunts her childhood home after losing her parents, as it is about the two boys who are afraid of her. Gnuse deftly explores the challenge of boyhood, the cost of appearing brave—of 'manning up.'"
— Maria Reva, author of Good Citizens Need Not Fear

"From her place inside the walls, the heroine of this enthralling novel describes and grasps the world outside--a place so naturally beautiful and terrifying she fears and longs to re-enter it.  This is a book about grief and childhood, about the glory of the physical world, the flight patterns of birds, about how it feels to be locked inside time, and inside the beautiful body and inside a bustling, heartbreaking family.  I've never seen a young writer burst onto the stage with this much holy brilliance and vivacity."
— Rebecca Lee, author of  Bobcat and Other Stories