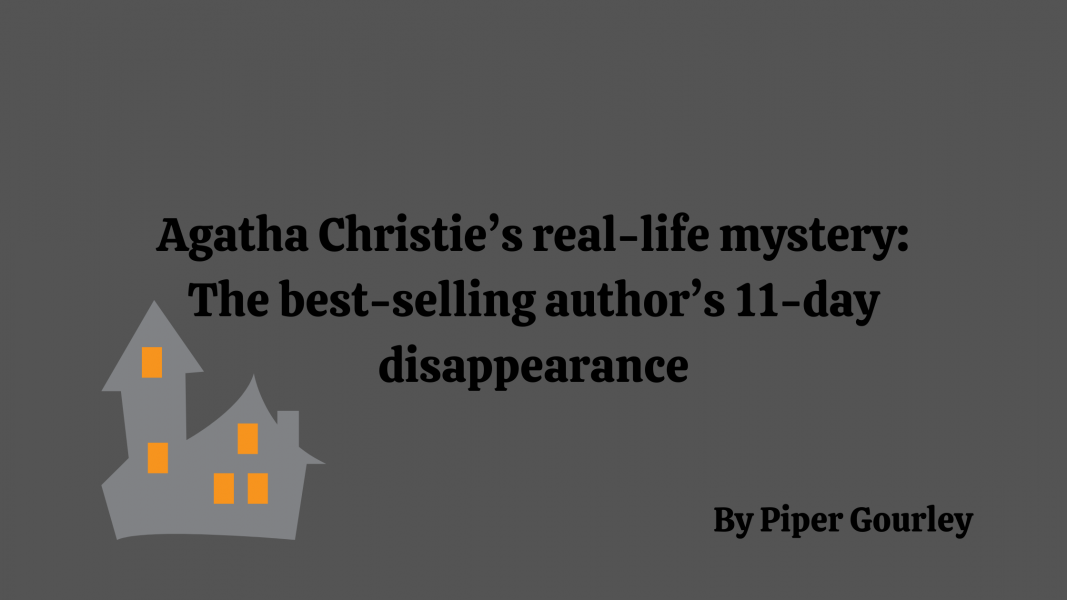 Agatha Christie’s 11-day disappearance from Berkshire is one of the crime author’s greatest mysteries. At the time she went missing, Christie was one of the most successful mystery novelists in Europe, and vanishing brought even more notoriety to her name. Her disappearance also sparked one of the most massive manhunts in modern history, with crime-fiction fans taking to the streets to lend their amateur detective skills to the case. Although her whereabouts were uncovered, the circumstances of this case have continued to puzzle historians to this day, who are forced to leave much to speculation. Christie’s disappearance proves that real life can be far more bizarre than fiction.

The night that Christie went missing

On the night of December 3rd, 1926, after kissing her daughter goodnight, Christie left her Berkshire home in her Morris Cowley with little more than a briefcase. Her husband had stolen away with his friends for the weekend after a heated argument with Christie. Her daughter, Rosalind, remained in the care of their maid. Although her maid figured that Christie’s departure was temporary, none of her family, friends, or employees realized just how bizarre the upcoming days would prove to be.

When 36-year-old Christie never returned home to her child, the famous writer was reported as a missing person. Authorities on the hunt for Christie soon came across the Morris Cowley she sped off in, abandoned on a slope near Guildford. Within hours, the press began to speculate about the mystery author’s whereabouts. Some theorized that her husband (who was seeing a mistress) may have taken Christie’s life in a fit of rage. Others thought that Christie may have set out to take her own life. More, still, thought that her disappearance was nothing more than a means of promoting her upcoming mystery novels. After all, from her ominous departure to her abandoned car, Christie seemed to be living out the plot of one of her own narratives. Christie was already well on her way to becoming a career novelist. Her books ‘The Secret Adversary’ and ‘The Murder on the Links’ (from her famed Hercule Poirot series) were selling supberly, and her sixth book, ‘The Murder of Roger Ackroyd’, was on route to becoming a best-seller.

Although the reasoning behind her disappearance was widely debated, the reality of her absence was undeniable. The discovery of her vehicle launched one of the biggest manhunts in history, with thousands of officers and hundreds of volunteers becoming key players in the search to track down Christie. The authorities grew desperate to find the author as quickly as possible, as each passing hour suggested a grimmer fate.

A massive manhunt for the missing author

Soon, fellow mystery authors (including Sir Arthur Conan Doyle and Dorothy L. Sayers) were recruited to see if they could make sense of the clues that Christie had left behind. Doyle, an occultist, attempted to turn to the paranormal for an explanation or a lead. Meanwhile, Sayers canvassed the crime scene, retracing the steps that Christie may have taken. Neither author could draw any clues from the strange circumstances of the scene; Christie seemed to have vanished into thin air.

The search for the author went international. Christie’s face was plastered across the front page of the New York Times, along with the promise of a hefty reward for any details about where she might have gone. As the hype around her disappearance grew, it seemed less likely that Christie would be found alive. Before long, the police decided that she had drowned in a nearby lake called Silent Pool. The lake, which was rumored to be bottomless, had claimed the lives of two others in the past. Authorities believed that Christie had taken her own life by walking into the dangerous waters.

After several days of searching for a body, Christie’s brother-in-law received a letter in the mail from the missing author, throwing a wrench in the authorities’ developing case. According to the letter, Christie had retired to a spa in Harrogate for some R&R. Unconvinced that the message was authentic, the officers continued to search for clues about where Christie might be. After all, no one could verify her whereabouts, and many feared that the letter was forged to throw officers off of Christie’s trail.

The idea that the disappearance was a publicity stunt was far past believable, yet authorities perused through the pages of her new manuscript, ‘The Blue Train’, with the hopes that it might clue them in on where Christie had vanished. On December 12th, nearly 15,000 people poured into the search efforts, including officers, spiritualists, and everyday citizens. They advised that citizens keep a lookout in London, as there was a chance that a disguised Christie might be hiding in plain sight. However, it wasn’t the investigators—amateur or trained—that recognized the writer’s notorious face.

The strange circumstances of her recovery

On the 14th of December, Christie was found safe (though not entirely sound) at a luxury spa called Swan Hydro. She had not checked in under her own name, but rather under the pseudonym “Mrs. Tressa Neele”—the name of her husband’s mistress. For eleven days, Christie paraded around the hotel as Neele. She presented herself as a highly sociable stranger who enjoyed attending nightly parties and other events at the spa. Eventually, she was recognized as the author by hotel staff, and the authorities were contacted. Her husband, Colonel Archibald Christie, arrived to identify her. He was baffled to witness her enter the lobby and begin casually reading a nearby paper...featuring her face on the cover. When he approached Christie, she didn’t seem to recognize him at all. It was later reported that Christie had suffered from severe amnesia, and had no idea who she was, how she got to Swan Hydro, or how much international concern she caused when she vanished from Berkshire.

The following weeks were hectic for the author. Though Christie refused to talk about the incident, the media tried desperately to straighten out her narrative for their publications. At the time, the papers claimed that Christie had gotten into a car accident, hit her head, and lost her memory. Before long, demand for her work skyrocketed. Her books went flying off the shelves to those who wanted their own taste of the author’s mysterious mind. At some point, the media moved on to the next news-worthy sensation, and Christie resumed her life as if nothing had happened.

Across the years, historians have continually taken interest in Christie’s eleven days away from the public eye. Many researchers now believe that, when Christie drove away that December evening, she intended to take her own life. There is a chance she was undergoing a psychological break that resulted in her memory loss, her baffling behavior, and her inability to later speak of those traumatic days. Much is still left up to debate, and only Christie (who never spoke of the event again) can truly know what happened during her real-life mystery narrative.

Do you want to experience some of the mystery that made Agatha Christie famous? Check out her wildly popular ‘Murder on the Orient Express’, here, and her other gripping publications, here.