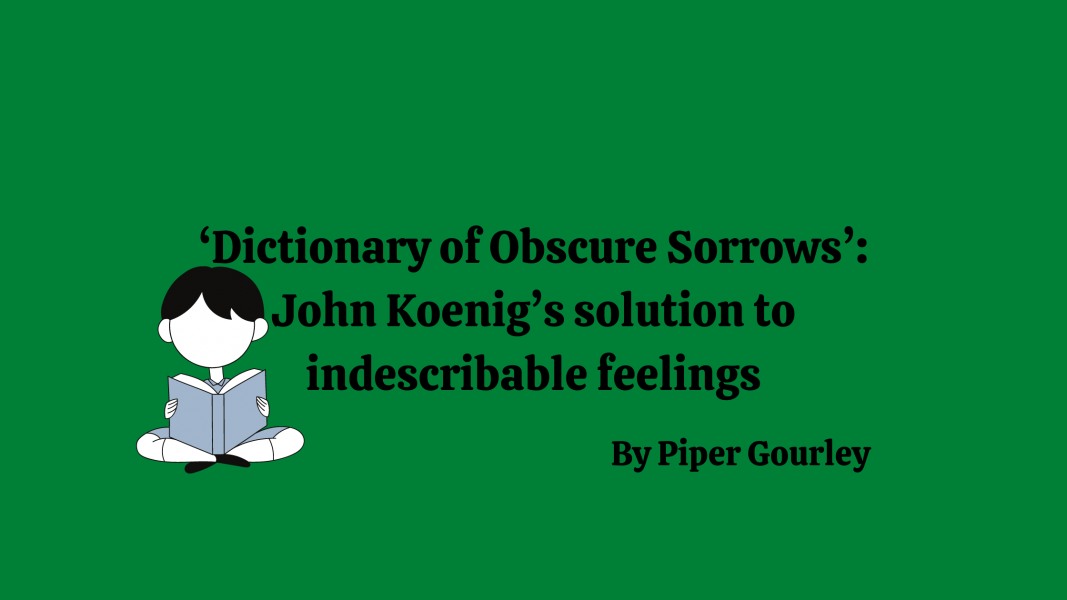 Over a decade ago, a young writer decided that the words in the dictionary couldn’t capture the full breadth of the human experience. He went ham-waxing poetic on the English language, and the ‘Dictionary of Obscure Sorrows’ was born. What is this dictionary’s purpose? And what are a few books that you can read to experience the obscure sorrows for yourself?

What is the dictionary of obscure sorrows?
Have you ever been at a loss for words? Has something been too beautiful or painful to articulate, so that words like “sad,” “happy,” “pain,” and “joy” don’t quite cut it? Or have you ever found yourself scrambling to find the feeling that accompanies an uber-specific scenario for which there seems to be no dictionary match? That’s where the ‘Dictionary of Obscure Sorrows’ comes in. The dictionary is filled with words (not recognized by the ‘Oxford English Dictionary’) that describe sensations that have not found a linguistic match in English. These range from words that describe the feeling of falling out of love with a close friend to the feeling of recognizing a worldly horror in a public place. The chosen words aren’t random. The creator of the dictionary, John Koenig, studied etymology in college and constructed each word and definition with a mind to sound, structure, shape, and syllables. On the dictionary’s website, he lists hundreds of obscure sorrows (written and spoken), their definitions, and YouTube links to videos about each word. The intricate project has served as a comfort for plenty of full-time feelers across the last few years.
What was it created to begin with? Koenig was attending Macalester College in 2006 when he began writing poetry. He found that, at times, there were no words that adequately summarized what he wanted to voice in his work. That’s when he dreamed up the ‘Dictionary of Obscure Sorrows’, which would ideally feature all the words that he needed to expand his poetry to its fullest form. He started up the website shortly after this epiphany occurred to him, but it really took off in 2015. The words from the dictionary started drifting around on social sharing sites, giving a larger voice to otherwise unnameable feelings. The words that emerged have since inspired songs, artwork, books, sports equipment, essays, and more.

What books will help you feel his “obscure sorrows”?
If you’re wanting to experience some of these obscure sorrows for yourself, these are a few of the poignant words from Koenig’s dictionary, and the books you can dive into that encapsulate these sensations to a T.
Wytai:
“n. a feature of modern society that suddenly strikes you as absurd and grotesque—from zoos and milk-drinking to organ transplants, life insurance, and fiction—part of the faint background noise of absurdity that reverberates from the moment our ancestors first crawled out of the slime but could not for the life of them remember what they got up to do.”
Suggested books:
‘Fahrenheit 451’ (1953) by Ray Bradbury: This may be a bit of a throwback, but hey, this is one of the most classic cases of a striking item (books) setting off a storm in a character’s head.
‘Do Androids Dream of Electric Sheep?’ (1968) by Philip K. Dick: The central characters in this novel are all coming to terms with the fact that the world may not be what it seems. Their main items of questioning? Animals. Robots. Where the two overlap.

Agnosthesia:
“n. the state of not knowing how you really feel about something, which forces you to sift through clues hidden in your behavior, as if you were some other person—noticing a twist of acid in your voice, an obscene amount of effort put into something trifling, or an inexplicable weight on your shoulders that makes it difficult to get out of bed.”
Suggested books:
‘Normal People’ (2018) by Sally Rooney: This reader and critic-favorite novel centers two characters who cannot figure out their feelings towards one another, themselves, and maturity. They nearly self-destruct trying to escape their nameless pains.
‘Frankly in Love’ (2019) by David Yoon: Teenager Frank Li contends with a question that sends most young adults into a crisis: “Who am I?” While involved in a fake romance and covering up a real one, Frank struggles to understand his attitude towards love and himself, until he’s left wondering how little he can trust his own feelings.

Onism:
“n. the frustration of being stuck in just one body, that inhabits only one place at a time, which is like standing in front of the departures screen at an airport, flickering over with strange place names like other people’s passwords, each representing one more thing you’ll never get to see before you die—and all because, as the arrow on the map helpfully points out, you are here.”
Suggested books:
‘Everything, Everything’ (2015) by Nicola Yoon: Madeline Whittier lives with a chronic illness that makes her allergic to most of the world, forcing her to remain in her sterilized house 24/7. Everything changes when a boy named Olly knocks on her door.
‘Every Day’ (2012) by David Levithan: This is actually the opposite of “onism,” but what’s a word without a good antonym? ‘Every Day’s protagonist wakes up in a different body every single day, and they’re altogether used to the experience...until they meet an incredible girl that makes them want to stick around.

Altschmerz:
“n. weariness with the same old issues that you’ve always had—the same boring flaws and anxieties you’ve been gnawing on for years, which leaves them soggy and tasteless and inert, with nothing interesting left to think about, nothing left to do but spit them out and wander off to the backyard, ready to dig up some fresher pain you might have buried long ago.”
Suggested books:
‘Turtles All The Way Down’ (2017) by John Green: Aza Holmes is sick of the intrusive thoughts that drive their everyday life. They end up taking on a personal investigation of the disappearance of a billionaire, distracting themselves from their spiraling reality.
‘The Little Paris Bookshop’ (2013) by Nina George: Bookshop owner Jean Perdu has been breaking down over the same failed relationship for years. He decides that he needs to confront a new pain: figuring out how their love came to an end.

Liberosis:
“n. the desire to care less about things—to loosen your grip on your life, to stop glancing behind you every few steps, afraid that someone will snatch it from you before you reach the end zone—rather to hold your life loosely and playfully, like a volleyball, keeping it in the air, with only quick fleeting interventions, bouncing freely in the hands of trusted friends, always in play.”
Book suggestions:
‘Aristotle and Dante Discover the Secrets of the Universe’ (2012) by Benjamin Alire Saenz: Ari’s life is in turmoil, and with his brother in prison, he seems to have an endless well of anger and sadness to dip into. He wonders if knowing the universe’s secrets will help him find joy, or if he’s destined to live in the same pain forever. Then he meets Dante.
‘The Woman in the Window’ (2018) by A.J. Finn: Anna has a severe case of agoraphobia that binds her to her home. She lives vicariously through the lives of her neighbors, imagining the potential of a carefree life...until she witnesses a murder in one of the windows.

Monachopsis:
“n. the subtle but persistent feeling of being out of place, as maladapted to your surroundings as a seal on a beach—lumbering, clumsy, easily distracted, huddled in the company of other misfits, unable to recognize the ambient roar of your intended habitat, in which you’d be fluidly, brilliantly, effortlessly at home.”
Book suggestions:
‘No One Belongs Here More Than You’ (2007) by Miranda July: Every single one of the characters in these endearing stories feels like utter misfits. And they’ll all steal your heart.
‘I’ll Give You The Sun’ (2014) by Jandy Nelson: The twins at the center of this narrative, Noah and Jude, are inseparable until a tragic event tears them apart. Without one another, they feel drifty and untethered, like they are missing an organ—but they may have a chance to restore the time lost between them.

La gaudière:
“n. the glint of goodness inside people, which you can only find by sloshing them back and forth in your mind until everything dark and gray and common falls away, leaving behind a constellation at the bottom of the pan—a rare element trapped in exposed bedrock, washed there by a storm somewhere upstream.”
Book suggestions:
‘Mosquitoland’ (2015) by David Arnold: You’ll spend much of this book cheering on runaway Mim’s road trip back to her mother, and equal amounts of time learning to appreciate the simple yet wonderful strangers she meets along the way. There’s gold at the bottom of all of these characters.
‘The Rosie Project’ (2013) by Graeme Simsion: Scientist Don Tillman comes up with the formula to identify the perfect partner, yet he is not prepared for the glimmering personality tucked away in the check-all-boxes woman that is Rosie Jarman.